Wasp Control – Pest Control Glossop Are A Phone Call Away

Wasp Control can be a problem at this time of year. The queen wasps are coming out of hibernation where they have spent the winter months and are starting to build their colonies.

As with bees, the common wasp will aggressively defend it’s nest. The wasp, unlike bees which die after stinging, can sting multiple times. A wasps nest can therefore be a danger to anyone who ventures near, as the wasp is more likely to sting than a bee, so wasp control can be a problem near domestic property. If you have a Glossop wasp control or Glossop wasps nest problem give me a call on 07940 062670 I can be with you within the hour. 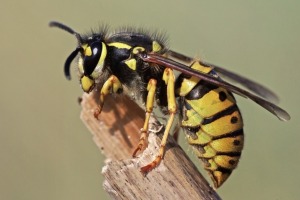 The queen wasp is around 20mm long and the common wasp measures around 12mm to 17mm. The nest is made from chewed wood fibres mixed with saliva. A wasps nest can contain from 7,000 to 30,000 worker bees plus 500 queen bees for the following season. Colonies usually only last one year with the workers dying at the beginning of the winter months. New queens and drones (male wasps) are produced towards the end of the summer months and the queen after mating usually survives in hibernation in a hole or another sheltered location.

Wasp nests are not re-used from one year to the next, so wasp control may only be needed on one occasion. Wasps tend to build their nest in lofts, air bricks, garages, sheds or any other warm and dry location in or around the home.

Professional wasp control is essential as they are naturally defensive of their nests. They will sting anyone or anything, even without provocation, just for being near to the nest. Wasp stings are not only painful but also carry a risk from infection and in some cases have been known to cause death from anaphylactic shock.

If you have a wasps nest close to your home or in your garden it makes sense to have it treated by a wasp control professional and Pest Contol Glossop are only a phone call away on 07940 062670. Pest Control Glossop also carry out wasp control treatment in Tameside, Saddleworth, Oldham, Stockport and Manchester.