Ant control is a constant problem in Britain. There are over 11,000 species of ants worldwide. In Britain we have around 50 species. Ants are sun loving creatures and the British climate is unsuitable for most ant species. The greatest concentration of ants are found in the warmer South Coast counties. The most common ant found in Britain is the common black garden ant, Lasius niger. It tends to nest mainly in soil, in cavity walls and under pavements and patios. Colonies can reach up to 15,000 in number, although the average is around a quarter to half of that number. If you have a Glossop ant control problem give me a call on 07940 062670 I can be with you within the hour. 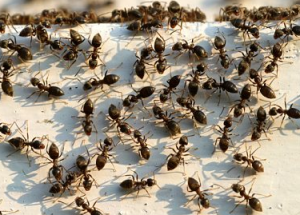 The common black garden ant feeds on sugary substances, nectar, other insects and other dead ants. It is harmless and does not sting. The red ant, Myrmica rubra, however is very aggressive and do possess a painful sting. They live in colonies of 100 to 300. The yellow ant Lasius niger, like the black common garden ant, is harmless and is the most skilled nest builder of all ant species found in Britain. These again are found in gardens and also in fields and meadows.

Ant colonies have a division of labour and consist mainly of wingless females who are sterile. They form groups of ‘workers’ and nearly all colonies have fertile males called ‘drones’ and a few fertile females called ‘queens’. The colonies have the ability to solve very complex problems and individuals can communicate. They make a fascinating study with their endless energy, all working together to support the colony.

The recent wet and warm summers in Britain have caused a 64% increase in callouts for ant control companies. Although there are DIY products that can kill ants, it is far more advisable to use a professional ant control company which will cost less in the long term.

If you are suffering with a Glossop ant control problem give me a call on 07940 062670. Ant control treatment is also available in Tameside, Saddleworth, Oldham, Stockport and Manchester through our sister company Abate Pest Control Services.